Tech companies are notorious for promising modular, upgradable devices and […]

Tech companies are notorious for promising modular, upgradable devices and failing to follow through. So, when Framework announced its completely upgradable thin and light laptop last year, including replaceable ports, bezels, and even (gasp) mainboards, everyone was understandably a bit skeptical.

As I said in my review of that original device, you just never know with these things. Regardless of how good the laptop was, much of its value hinged on how well the company would continue to support it. Framework assured us that it would make replacement parts, repair guides, and a centralized marketplace available to laptop owners — and future generations of Intel CPUs. And we waited to see if it would.

Well, it’s been (roughly) a year. And Framework did it. It did it all.

The company has announced a new version of its laptop with 12th Gen Intel processors, and now it’s shipping it out. Perhaps more exciting is that it’s also releasing a 12th Gen mainboard that owners of last year’s unit can use to upgrade. And the company did, in fact, publish the repair guides and put up the marketplace, and there’s a whole bunch of stuff on there that you can buy.

Though the new Framework laptop is unremarkable as a laptop, it is laudable in what it represents. Framework is committed to right to repair and has put its money where its mouth is. After all the times this market has been burned, that fact is worth celebrating. 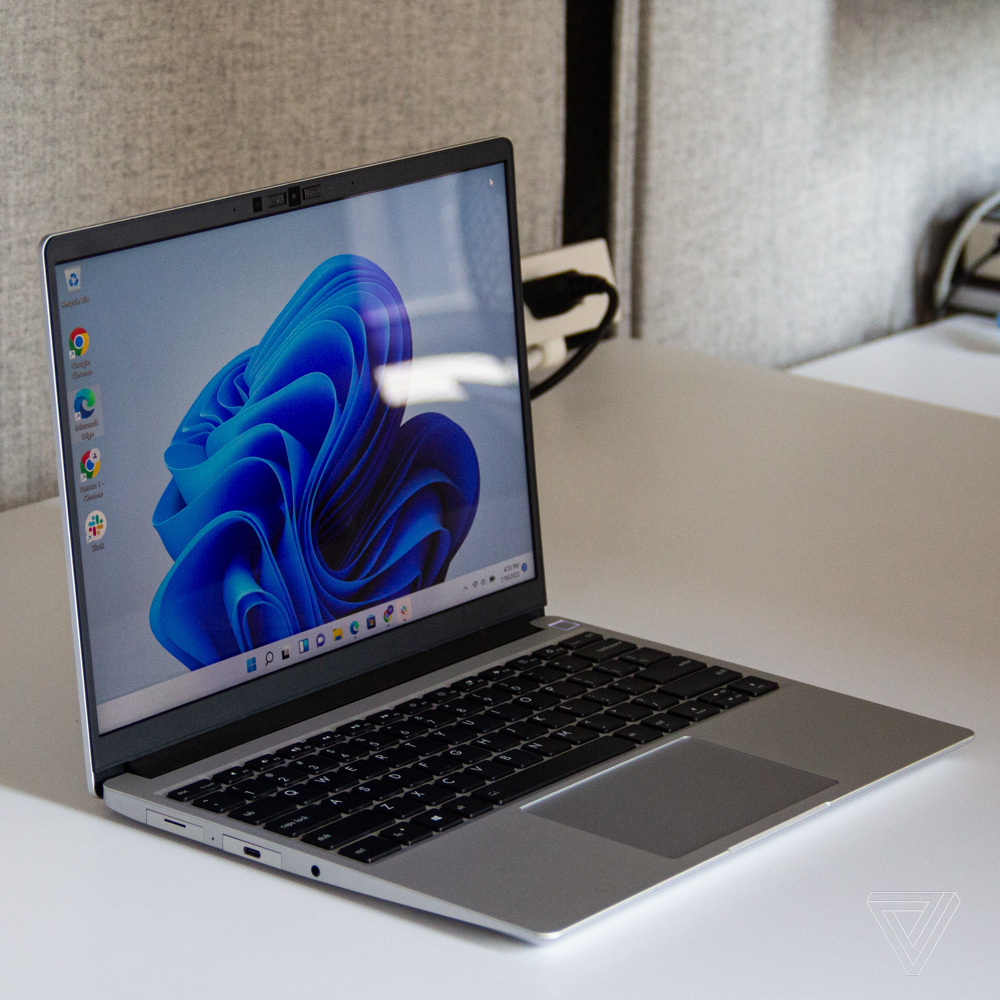 Processor aside, basically the only design change Framework made to the new release is its lid. The company has switched “from an aluminum forming process to a full CNC process” on this cover. Fair enough. I will say that this lid, which felt flimsy to me last year, feels more rigid now — there’s flex but less to speak of.

For upgrading folks, the company has also released reference designs detailing 3D-printable cases and stands that people might use to repurpose their old mainboards. I’m not sure how many people will actually do this, but I certainly appreciate that the company is encouraging people not to throw away their old parts.

The third update is that there’s also supposed to be a new ethernet expansion card coming as a port option, though Framework still has a “coming soon” sticker on that. (You can select four ports on this Framework model, as you could on last year’s model. I went with one USB-A, two USB-C, and a microSD but could’ve swapped in a number of others, including HDMI. The only limitation is that you have to pick at least one USB-C since that’s how the laptop charges.) Laptops with ethernet are basically unheard of outside of large gaming rigs these days, so this is a PSA to anyone who’s been bummed by their demise.

The best part of the chassis remains the same. It’s endlessly upgradeable: you can swap out everything from the bezels and keycaps to the fingerprint reader and bottom cover.

If you want replacement parts, you’ll find them on Framework’s marketplace. This was a ghost town last year but looks pretty good this year. Everything’s up for sale: mainboards, memory, speakers, heatsinks, displays, touchpad cables, webcam modules — the works. Each part you receive has a QR code on it. Scanning that code brings you to documentation showing relevant guides and replacement parts.

It looks like prebuilt computers and DIY kits are backed up until August at the earliest, but Framework tells me that you should be able to order mainboards today and that they’re shipping this month.

My primary gripe with the last Framework also remains. This chassis is held together with T5 Torx screws, which means you can’t pop it open with a regular Phillips screwdriver. This will be less of a problem for prior Framework owners who already have Framework’s screwdriver, but it still may make it more of a hassle to find replacement screws. Framework told me last year that it uses Torx screws because they avoid stripping issues that can come up with Phillips screws.

Still, in the grand scheme of things, this is a repairability dream. It received a rare 10 out of 10 from iFixit for a reason.

So, that’s the upgradeability. How is the latest Framework as a laptop? It’s fine. It’s just fine.

At 0.62 inches thick and 2.87 pounds, the device is thin and light enough to carry around without issue. It’s somewhat plain looking (though the gear logo on the lid is cute) but hasn’t collected fingerprints or smudges during my testing period. There’s an orange bezel option that could potentially jazz up the look, though I wish you could get a lid in a matching color. (The orange and gray bezels are also $10 more than the black ones.) At least it’s not covered in branding — the hinge says “Framework” on the left side, but it’s an unobtrusive flair.

The display is 13.5 inches with 2256 x 1504 resolution and a 3:2 aspect ratio — my favorite aspect ratio — offering quite a bit of vertical space. It gets plenty bright for inside and outside use, maxing out at 444 nits in my testing. It does kick back some glare but nothing that interfered with my work at medium brightness.

Elsewhere, there’s a 1080p webcam, which is no longer the rarity that it was last year. The speakers are standard laptop fare: volume is acceptable but not amazing; bass is audible but somewhat tinny.

The keyboard is quiet and more mushy than it is clicky; I was a bit below my usual typing speeds but made almost no errors during my typing test. Replacement keyboards can be ordered in a handful of different languages and layouts, which could be handy if you like to swap back and forth.

The 4.5 x 3-inch touchpad is smooth, with an easy click and no palm rejection issues that I experienced. There are different-colored keycaps available (including clear ones that look very cool), and I wish you could change the touchpad’s color as well. Replacement touchpads are currently listed as “coming soon” on the marketplace.

Powering all of this is Intel’s 12th Gen Core i7-1260P, which is found in some of the best thin and light laptops on the market including Samsung’s Galaxy Book2 Pro. It’s got 12 cores, including four performance and eight efficiency.

The DIY kit, which starts at $819, is a lot more configurable with all kinds of SSD and memory choices (as well as the option to leave certain parts out if you already have your own). After messing around with configurations there, it seems like DIY kits are generally close in price to prebuilts with similar specs.

In real-world performance, I generally didn’t run into significant problems. I used this as a primary work driver including around a dozen Chrome tabs, often with a stream or YouTube and a couple of other apps running in the background with downloads now and again. The bottom got hot when I was putting the device through a lot while on battery saver, but I never felt that heat in the keyboard. I also didn’t hear fan noise while I was working (though I certainly heard it while benchmarking). For those sorts of use cases, the Framework is quiet, fast, and cool. Importing and editing a batch of photos in Photoshop wasn’t a problem either.

That said, this would not be my computer of choice if I had to use Adobe’s Premiere Pro or Media Encoder basically ever. The programs were noticeably slower and less responsive than they would be on more powerful machines, Premiere froze up a few times, and I was getting the spinning wheel left and right when I tried to export.

In benchmark testing, the Framework averaged 32fps on Shadow of the Tomb Raider (which isn’t the frame rate you’d hope to have if you were actually playing but is slightly better than we saw from the M2 MacBook Air on the lower preset). It did lose to the Air (not to mention the Pro, which is also similarly priced) in most of the other synthetic benchmarks we ran — and pretty badly in some cases. But it’s certainly showing improvement over its 11th Gen predecessor, the Core i7-1165G7, which we’ve seen worse results for in laptops like last year’s Dell XPS 13 and Lenovo’s ThinkBook 13s. It even gives the MSI Prestige 14 Evo with Intel’s flagship Core i7-1185G7 a run for its money on some of these tests.

But there’s one area where all of those laptops soundly beat this one, and it’s battery life. On this system, I was only averaging about five hours and 20 minutes of continuous work with the screen at around 200 nits of brightness and Battery Saver on. This is not great for thin and lights. It’s less than half that I get out of the MacBook Air (which is only $170 more than the Framework for similar specs) and close to half of what I get out of the best thin and lights out there, like the ThinkPad X1 Carbon.

These products are both thinner and lighter than the Framework and boast two of the best-built chassis on the laptop market. It’s also worth noting that more efficient devices use less energy, and I’d hope that would be a significant part of the sustainability mission that Framework has made so central to its branding.

I’ve been wrestling with how best to reconcile these facts. Here is where I ultimately come down: reparability has costs. In the Framework’s case, battery life is the biggest one. But they can also be seen in various forms across the board. Shoppers will have little problem finding machines at its price point that match or beat it in almost every category (and double its battery life). As much as I love the Framework, that fact makes me loath to issue a blanket recommendation.

But Framework has also never claimed that any of these areas are the Framework’s calling card. The company hasn’t consistently vowed to deliver the prettiest chassis or the best speakers on the market. Instead, it has told us time and time again that a rigorous ecosystem for repairability is coming. It’s delivered there, and it’s betting that there’s an audience who cares about that ecosystem above everything else mentioned in this review. At that point, comparing this device to other laptops in its category seems somewhat beside the point.