Yesterday we reported that Google’s SEO section of its digital […]

Yesterday we reported that Google’s SEO section of its digital marketing coursework for its certification program spoke about the importance of keyword density and word count (by the way, it is not important). Well, within 24 hours, Google has removed that content from the coursework.

Gianluca Fiorelli posted an update this morning on Twitter saying “the SEO part of the Digital Marketing course by Google on Coursera, and they quit the keyword stuffing part.” He shared the before and after screenshot: 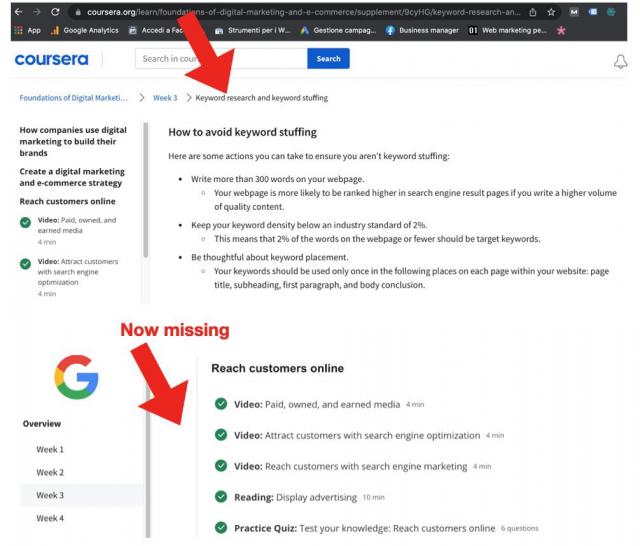 This was removed because Google has said countless times that SEOs or content writers should not focus on keyword density or word count. When this was presented to Danny Sullivan of Google, he said we should ignore this specific advice in the Google course. He then escalated it and Google acted quickly to remove this piece of content.

It does make you wonder, what else in this digital marketing coursework is not the best advice if we saw the one or two slides that talk about SEO being inaccurate?

So, @21Interferenze sent me an update about the SEO part of the Digital Marketing course by Google on Coursera, and they quit the keyword stuffing part. Screenshot below ⬇️
cc: @rustybrick @dannysullivan pic.twitter.com/moX3VRKI5L

In any event, it is nice to see Google act this fast to remove that material – it is just a shame Google let this happen in the first place. We knew this would happen when we first covered the digital marketing certification.